Washington, DC, November 5, 2018 — At a moving ceremony at the National World War II Memorial in Washington, DC on October 25, Michael Johnson received the 2018 Jaharis Service Award. This award is presented each year during the Washington Oxi Day Foundation celebration of #OXIcourage in Washington, DC. It celebrates the life and legacy of Michael Jaharis by recognizing an individual for their dedicated service to our country during the Korean War and for their many contributions, in the spirit of Michael Jaharis, to the Greek-American community, to the United States and to the world. The award was presented to Johnson by the Executive Director of the Jaharis Family Foundation, Peggy Sotirhos Nicholson. 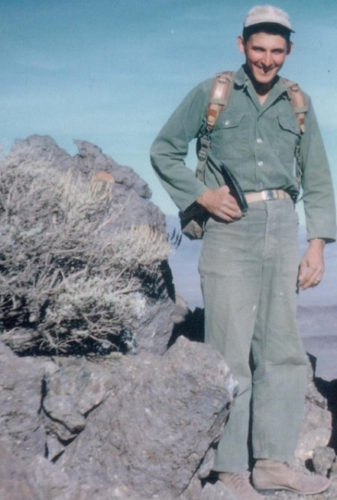 To see video of the introduction and acceptance remarks, click here 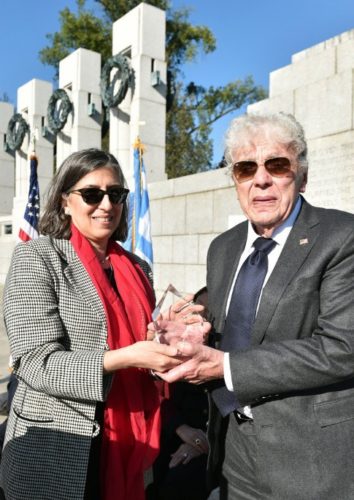 Honored alongside Johnson at this ceremony were three WWII veterans – a Greek, an American and a Greek-American. They were: 101 year old American veteran nominated by Senator Bob Dole (who previously received this award), Celestino Almeda; 97 year old Greek veteran who fought alongside US troops in the historic D-Day battle, Rear Admiral Theodoros Lymberakis; and (posthumously) Greek-American member of the remarkable OSS (the pre-cursor to the CIA), Alexander Georgiades.

Michael Johnson
Michael S. Johnson was drafted in the Korean War and served from September 1950 to December 1952. He completed basic infantry training at Fort Dix in Jersey and was then assigned to Fort Belvoir in Virginia where he taught photogrammetry and interpretation of aerial photographs.

In June 1951, Johnson was transferred to the Armed Forces Special Weapons Project (AFSWP), headquartered at the Pentagon. Working together with the Atomic Energy Commission (AEC), he was involved with a program at the Nevada test site that consisted of detonating 15 atomic bombs, carrying from 1 to 31 kilotons, to obtain the first ever measurements of the heat and blast effects. Johnson offered advice (as a non-commissioned officer) and witnessed the detonation of all 15 bombs, one of which was the size of the bombs dropped at Hiroshima and Nagasaki.

Johnson was born in Maryville, Missouri in 1926. His father immigrated to America at age 14 in 1903. Johnson graduated from The Ohio State University in 1949 with a BA and MSc in Geology. He enjoyed a successful career in the oil and gas business, highlighted by his participation in the discovery of the Parshall Oil Field in North Dakota, one of the largest oil fields in North America. In 2008, he was awarded the prestigious “Outstanding Explorer” Award by the American Association of Petroleum Geologists. His exploration efforts over the past 57 years include over 10 oil discoveries spanning the entire Rocky Mountain Region, as well as projects in Greece, Italy, Guatemala, Panama and Canada.

For the past 60 years, Johnson has been an active supporter of Hellenism and Orthodoxy in the U.S. He is a member of FAITH, serves on the board of trustees for Leadership 100 and served for over 20 years on the Archdiocesan Council (where he first met Michael Jaharis). He has been a member of the Order of Saint Andrew since 1980 and is a major financial supporter of the Archdiocese, among several other causes. Johnson presently lives in Denver, Colorado with his wife of 59 years. They have two children, Alicia and Mark, and two grandchildren.

Michael Jaharis
Emmanuel Michael Jaharis was born and raised in Evanston, Illinois. Jaharis was the son of Greek immigrants from the village of Aghia Paraskevi on the Greek island Lesvos. Shortly after his college graduation in June 1950, Jaharis was called to duty to serve in the US Army during the Korean War and was eventually deployed to Zell am See, Austria to help run the medical and pharmaceutical supply.

After his service, while working full time as a pharmaceutical sales representative, Jaharis earned his Juris Doctor as a night student from the College of Law at DePaul University. In 1988, Jaharis founded Kos Pharmaceuticals, where he led his team to pioneer innovative drug therapies to treat cardiovascular disease. Aside from working hard to improve the lives of millions through pharmaceutical products, Jaharis along with his wife Mary worked tirelessly and gave generously through their public service and philanthropic endeavors. In 1986, Michael and Mary founded the Jaharis Family Foundation, Inc. Jaharis was a model of how to offer time, energy and intelligence in pursuit of a better world. He is survived by his wife Mary, their children Kathryn and Steven and his wife Elaine, and five grandchildren, as well as by the millions of people whose lives he has positively impacted.